On May 8th, 8 eager students joined me for 5 days of chasing and repoussé instruction at the Tacoma Metal Arts Center. There were students with varying skill sets ranging from not even knowing what chasing and repoussé is exactly, to pretty well advanced, and everything in between. The one thing everyone had in common is they were all eager to learn, and have a good time.

Everyone was greeted with pitchbowls, chasing tools, 3 weights of my chasing hammers to use.

On the first day of class, everyone was given a skill assessment exercise to determine what project would be best suited for them. While most fell into the beginner/novice catagory, Douglas Pryor was already pretty advanced, and well ahead of the rest of the class.

If you've never attended a chasing and repoussé workshop before, it sounds a lot like you'd expect santas worksop to sound like with a bunch of happy tapping going on.

Douglas Pryor and his scroll design.

There was some pretty bad habits to break, but by day 3 everyone had their hammers whipping, and to much improved tool control.

Ruthie Cohen telling everyone about her newly found tool tool and hammer control.

Next was on to the traditional western technique of chasing and repoussé with an emphasis on finish from the front. 7 students worked on a fluer de lis design while Douglas moved on to a more complex design.

At the end of the class everyone walked away with newly developed and refined skills, as well as a new creative fire burning.

Douglas Pryor's 2nd piec was a bit ambitious for the time remaining, but I'm confident he'll finish an awesome piece when he has the time

If you were hoping to make it to the last class but couldn't: fear not, there is another class with registration open and spots available in September http://www.metalsmithing-tools.com/#!product/prd1/3536470121/5-day-intensive-workshop-sept-25-29-2015

I hope to see you there! 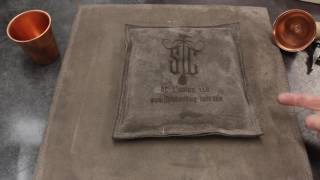 Tutorial Tuesday is back!

It's been a while

2 New sets of hammers just in time for the holidays!